This is probably the most controversial and often asked question about veganism. Is honey vegan? For me, it is not! 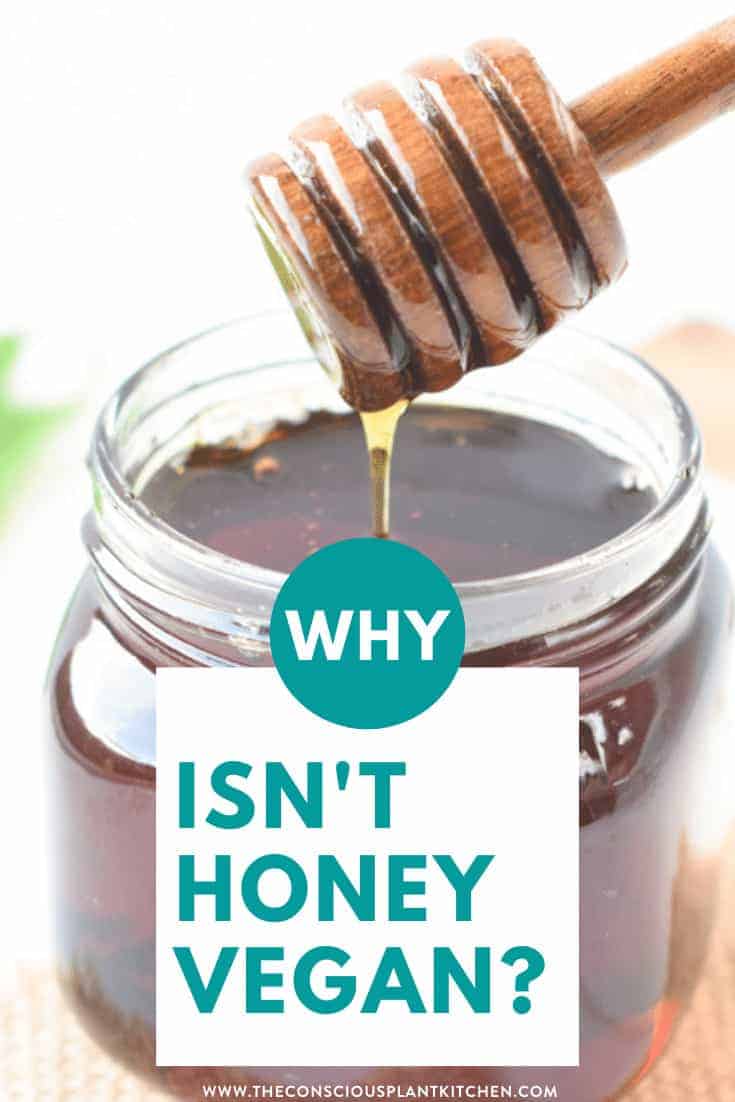 (**this is not honey! the picture is brown rice syrup)

Let’s first go back to the definition of veganism. There are generally 3 main reasons why one chooses to be vegan (generally in that order).

So to answer whether or not honey is vegan, let’s have a look at the impact of honey on animals’ well-being and its ecological impact.

Honey is about exploiting bees

There’s no doubt about that, in order to make honey, one needs to have hives and get bees to work. In itself, this is animal exploitation.

Some people argue that bees have less capacity of feeling pain or suffering than larger animals like cows or pigs. But even that is now in question with some recent studies showing that bees have some level of sentience.

Beyond the fact that bees can feel, every industrial exploitation of animals leads to ethical questions.

Bees make honey as a way to feed their colony, in particular for the cold months of winter. When the honey is taken for human consumption, bees still have to be fed. They are generally provided with a less nutritive alternative like a simple sucrose syrup.

It is well known that honey has some antiseptic properties. Bees actually rely on these properties to fight diseases. As a result, it is quite frequent that entire colonies of bees need to be culled because of a germ that might have naturally been fought off if they had eaten their honey.

Another unethical aspect of bee-keeping is the practice of selecting the most productive species. Like with most other industrially-exploited animals, selecting the “best” species leads to a smaller gene pool. Less genetic diversity then exposes bees to a higher risk of lethal diseases and a shorter life span.

From an animal suffering perspective alone, honey is not vegan.

Shouldn’t we thank the honey industry for pollination?

This is a common argument in favor of the mass harvesting of honey. Bees pollinate, therefore more honey farms mean more pollination which is crucial for the survival of so many other species.

It is a very distorted version of the truth. Out of the thousands of pollinating bee species, only a handful can make honey. And honey farmers only exploit a few of this handful.

These species also tend to have a very specific affinity to some flowers. You can confirm that by looking at the various types of honey: manuka honey, acacia honey, eucalyptus honey, sage honey, etc.

These exist because the bees only like specific flowers. Besides, many other insects contribute to pollination, such as wasps, butterflies, flies, mosquitoes, and even ants. So honeybees only contribute a small part to global pollination.

The environmental impact of honey

It is actually now widely believed that factory-farmed honey is actually partially responsible for the decline in the wild bee population. They compete with wild bees in their natural habitat.

And because honeybees only pollinate specific flowers, they in turn increase the abundance of these flowers. This leads to a decline in flowers favored by wild bees.

Honey bees with their weakened immune system due to their consumption of sugar syrups also spread diseases to wild bee species.

This means that from an environmental perspective, honey is not vegan either.

Humans have been using bees to make honey for one reason. Because it tastes good. So let’s have a look at a few vegan alternatives to honey.

Pyure makes a harmless huney, that is both sugar-free and vegan. A good healthy alternative.

But there are also simpler alternatives like date syrup or maple syrup.

Avoid honey! It’s not good for the environment and it’s harmful to bee colonies.