Olive Oil is one of these ingredients used everywhere, from baking recipes to meals, from salads to burger sauce. Olive oil is also often used in vegan recipes to replace animal-based fat like butter.

Olive Oil is a plant-based product – it’s made with no animal-sourced ingredients. However, it’s not necessarily enough to make it vegan-friendly. Let’s find out why. 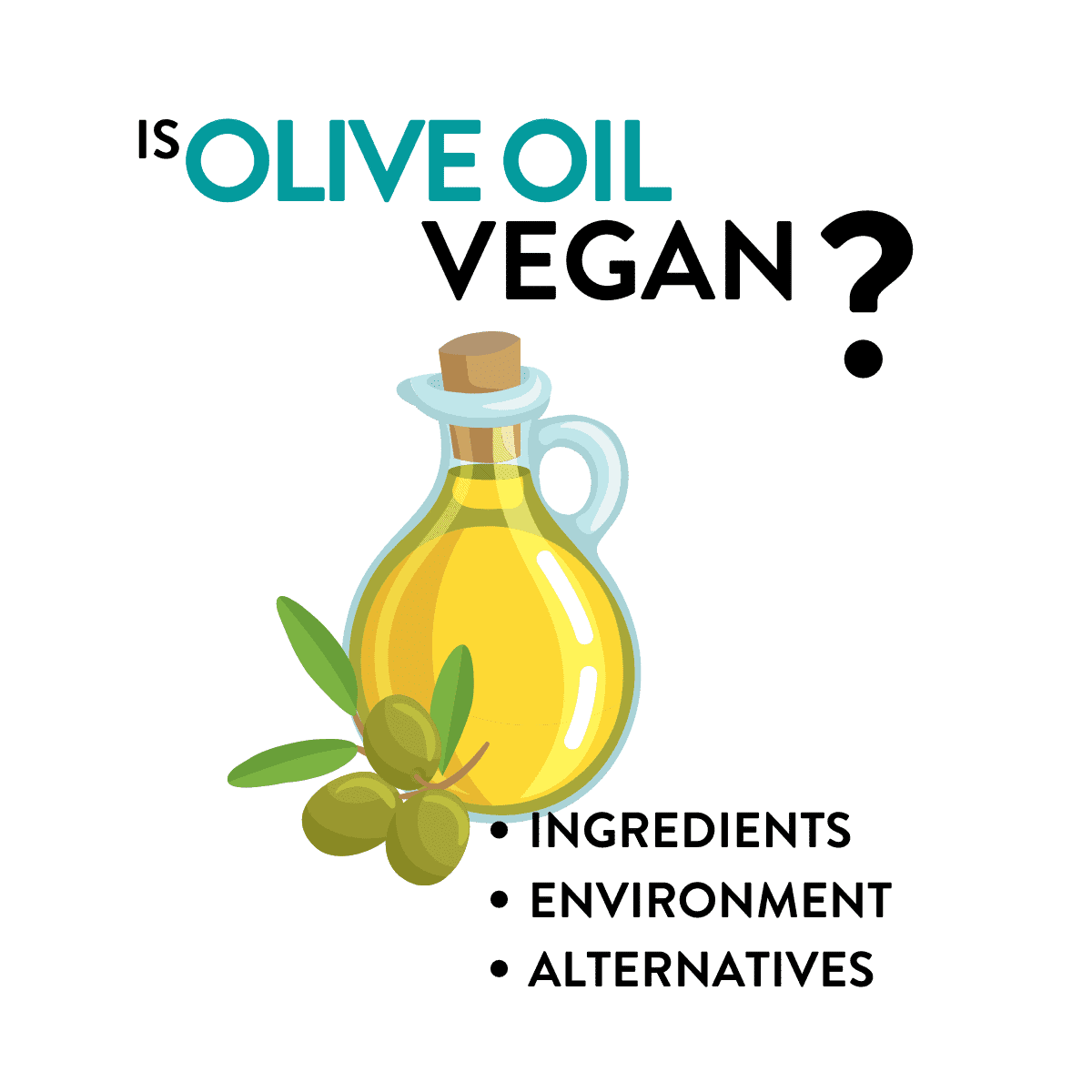 What Is Olive Oil?

Olive Oil is a liquid fat obtained by grinding olives into a paste that is then centrifugated to extract the oil. The finest oil is obtained from ripe olives. Green olives make bitter oil, overripe olives produce a cloudy oil with suspended particles.

Virgin Olive Oil is extracted using only mechanical means, without any chemicals.

Refined Olive Oil is obtained using a refining process that must keep its glyceridic structure. It’s often made using charcoal filters, and as a result, has less flavor than virgin olive oil.

Therefore, olive oil is a plant-based product. However, some vegans avoid consuming olive oil because of its environmental impact.

Olive oil product, in particular on the large scale necessary to maintain the supply, has a large environmental impact on our planet.

Land use and erosion

Most olive plantations are far from the picturesque local farmer growing a few trees and making a few hundred liters of oil a year.

Plantations cover hundred of hectares and are made exclusively of olive trees. In southern Europe and around the Mediterranean sea, where olive trees grow, the soil is relatively poor.

As a result, all other plants are removed to leave as much soil as possible to the olive trees that are also spread out quite a bit to maximize their yield.

Olive trees use a lot of water, and they grow in places that experience frequent rainfall deficits.

It is estimated that about 14,7000 cubic meters of water have to be used for every ton of olive oil produced (source).

So Olive Oil is one of the worst oils when considering its water footprint.

Olive Oil also has a significant greenhouse gas emission footprint because of how it is produced (source).

Olive Oil produces 4.5 kg of CO2-equivalent emission per kg of oil, twice as much as coconut oil and 5 times as much as peanut oil.

It is the worst of all dietary oils when looking at emissions alone.

Can I cook with Olive Oil?

These temperatures are above common cooking temperatures. Therefore, they are perfectly healthy when heated.

Why does the smoke point matter for cooking oils?

The smoke point is the temperature at which an oil starts to smoke because it’s not heating up anymore, but it’s burning.

When oil burns, its components break down, releasing chemicals that can:

As a result, it’s critical to avoid heating oil to its smoke point.

Note that any refined oil would have a smoke point much higher than its unrefined alternative due to the lack of impurities that tend to burn at lower temperatures.

As a result, Extra Virgin Olive Oil is known to have many health benefits (source):

What Are Olive Oil Alternatives?

There are many possible alternatives to olive oil if you choose to avoid it. There are many other oils that can enter your whole food vegan diet. 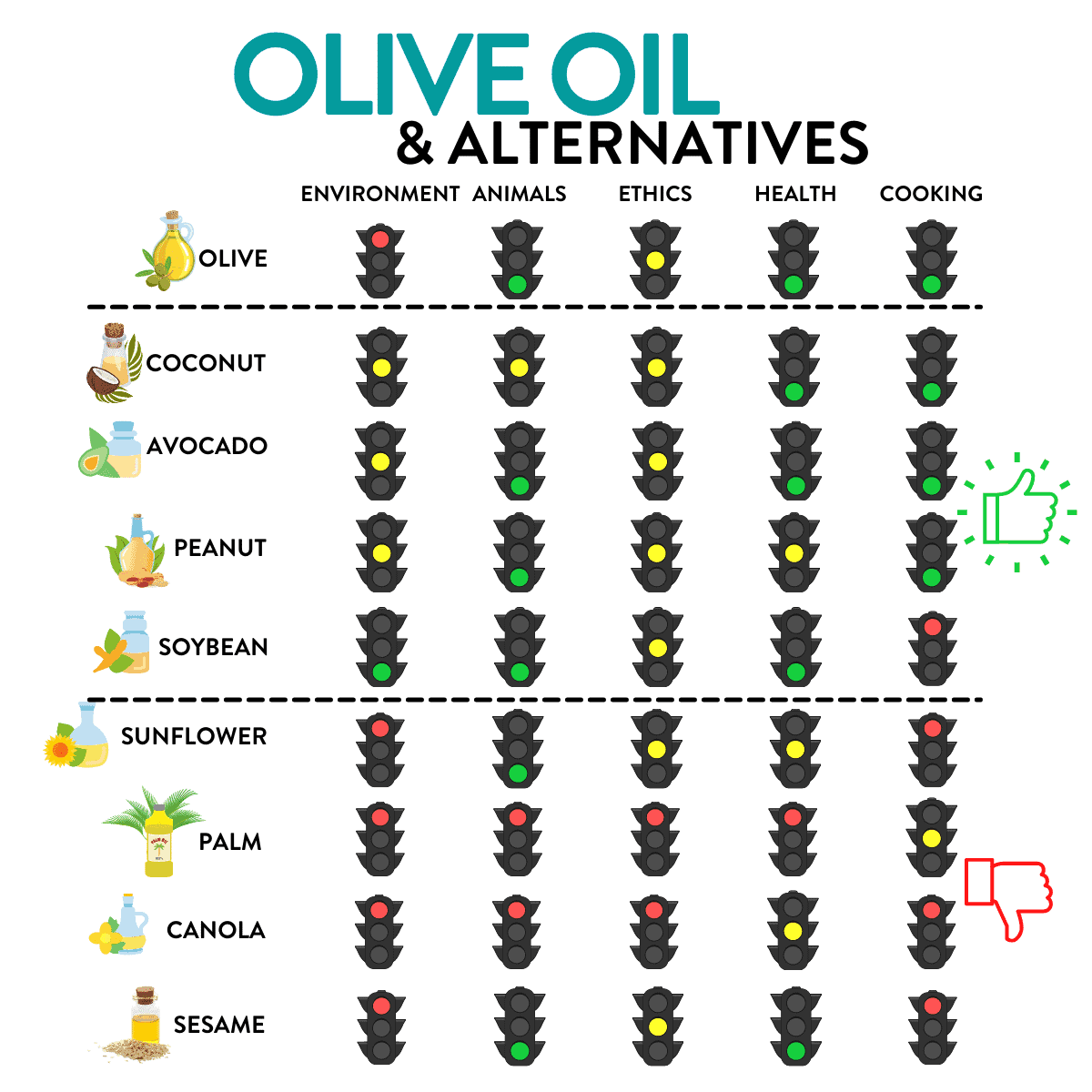 Coconut oil is another vegetable oil that is produced from coconuts.

Its health properties are somewhat similar to olive oil. You can also safely use it for cooking as well as no-bake recipes.

Coconut Oil also has a lower impact on the environment than Olive oil, with less water used and about half the emissions.

Peanut Oil is an oil that is suitable for cooking, has a much lower environmental impact than many other oils, and tastes very good.

It has the only issue of being made with peanuts and therefore can trigger allergies.

It uses close to 10 times less water than olive oil and has a low carbon footprint.

There are some ethical concerns with avocado production in certain regions of the world, in particular in South America.

Pick an avocado oil produced ethically and you have a great cooking and baking oil!

Rapeseed oil, also called Canola oil (for CANada Oil Low Acid), is a terrible oil. Its environmental impact is high, mostly because it’s a genetically engineered plant made to be resistant to roundup so that the crops can be covered in herbicide to increase yields.

It is also potentially dangerous for cooking, like many other seed oils. Seed oils are rich in polyunsaturated fats that oxidize when heated.

Palm oil contributes to deforestation. It is harvested in highly unethical ways. It contributes to the endangerment of Orang Utans. And it’s not great for cooking.

Sunflower Oil is another oil with a large environmental impact. Its emissions and water usage are still lower than olive oil, but they are nonetheless very high.

Since it’s also a seed oil, sunflower oil is susceptible to heat damage well under the smoke point.

Sesame oil production consumes a huge quantity of water – even more than olive oil. It also has a comparable carbon footprint.

It has a medium smoke point, but since it’s made with seeds and it’s rich in polyunsaturated fats, sesame oil oxidizes fast when heated.

Though Olive Oil is 100% plant-based dietary oil, its consequent environmental impact pushes many people to avoid it and prefer other oils.

If you believe that veganism is also about reducing the impact of our food on the planet, then olive oil is not vegan.