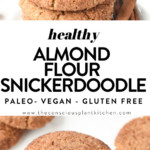 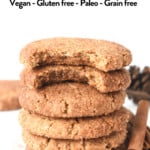 These Vegan Snickerdoodles with almond flour are soft, chewy cinnamon cookies with a healthy twist!

Bonus, this gluten-free snickerdoodle recipe with almond flour is also refined sugar-free and egg-free made only with wholesome ingredients!

No, a classic snickerdoodle recipe contains animal products, including eggs and butter.

Therefore, you need to tweak the original recipe to make it vegan-friendly.

But you can find below my vegan, healthy snickerdoodle recipe using almond flour.

How To Make Almond Flour Snickerdoodles

The best snickerdoodle recipes all include cinnamon, cream of tartar, and coconut sugar for a delicious fall taste.

This is an almond flour snickerdoodle recipe made without eggs or butter. To make these grain-free snickerdoodle cookies, you need.

Prepare a flaxseed egg for the vegan version of these almond flour snickerdoodles instead of an egg.

In a small mixing bowl, combine flaxseed meal with lukewarm water and wait for 10 minutes until an egg-like texture forms.

Add all the dry ingredients into a large mixing bowl and whisk to combine evenly.

Make a well in the center of the dry ingredients and add melted coconut oil, vanilla extract, and maple syrup.

Stir with a spoon at first, then use your hand to form a cookie dough ball. The dough is sticky, and that’s normal.

Chill the dough for 5 minutes, and meanwhile, prepare the cinnamon sugar.

A snickerdoodle cookie is always coated with cinnamon sugar before baking. In a small bowl, stir coconut sugar and cinnamon.

Line a cookie sheet or a baking sheet with parchment paper. Set it aside.

Then, roll each cookie dough ball into the cinnamon sugar and place it on a cookie sheet covered with parchment paper.

Leave a 2-thumb space between each ball.

Step 8: Pressing Down The Dough Balls

The cookies will expand in the oven, but they need a little help before!

Use the bottom of a glass or your hand to flatten the cookies to a 0.5 mm thickness.

The vegan snickerdoodle cookies are ready when golden brown and set on top.

They are still soft when out of the oven, and they firm up at room temperature.

Be patient and don’t move or touch your baked goods just after taking them out of the oven.

Cool 10 minutes on the cookie sheet, then cool completely on a cooling rack for about 30 minutes. They firm up with time.

These almond flour snickerdoodle cookies can be stored for up to 5 days in a sealed cookie jar in the fridge.

You can also freeze the cookies in zip-lock bags and thaw them for 3 hours before serving them at room temperature.

How Do Vegan Snickerdoodles Taste?

These healthy snickerdoodle cookies are soft and chewy, with a tangy flavor from the cream of tartar and a strong cinnamon flavor.

The cinnamon-sugar coating adds a caramelized sweet flavor on the outside.

Can I Make Snickerdoodles Without Cream Of Tartar?

Yes, it’s possible to make this soft snickerdoodle recipe without cream of tartar. It’s actually an optional ingredient that just adds a bit of flavor.

Can I Make Snickerdoodle Bars?

Yes, you can turn this cookie recipe into Vegan Snickerdoodle Bars. Just spread the batter on a large baking dish.

Cook the bars for 10-15 minutes, depending on how thick you made them.

Can I Make a Snickerdoodle Mug Cake?

What is the difference between cinnamon cookies and snickerdoodles?

Snickerdoodle Cookies also use Cream Of Tartar for added tanginess.

Why do they call it a snickerdoodle?

The name Snickerdoodle might come from the German “Schneckednnudeln” which are snail-shaped pastries often made with cinnamon glazing.

No, Sugar Cookies are much simpler recipes, normally not made with either cream of tartar or cinnamon. 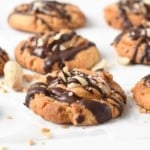 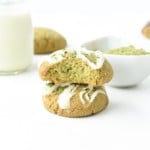 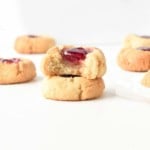 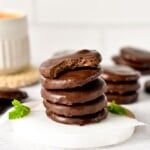 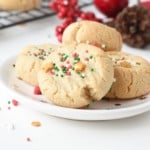 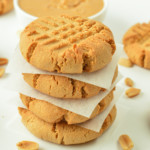 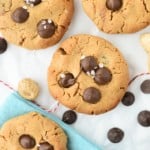 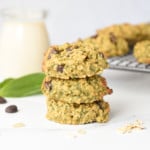 Made these healthy snickerdoodles with almond flour? Share a comment or review below! I love to read your feedback on my recipes. You can also join me on Instagram to share your recipe picture. 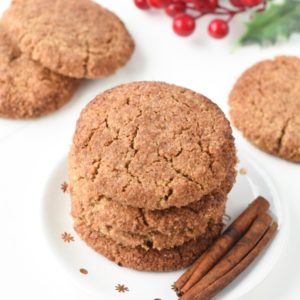 Flour – I didn’t try the recipe with any other flour. Oat flour could work, but I guarantee that the recipe won’t work with the same amount of coconut flour or all-purpose gluten-free flour. It would be a different recipe to develop. Flaxseed egg – To replace one large egg in the non-vegan recipe. Coconut sugar – can be replaced with white sugar or unrefined cane sugar.  Maple syrup – can be replaced with any liquid sweetener you like including agave, rice syrup. Cream of tartar – can be omitted. It only adds a tangy flavor to the cookies, as in regular snickerdoodle cookie recipes. Coconut oil – don’t replace it with vegan butter. The recipe wouldn’t work.
Share on Facebook Pin Recipe