It’s a great recipe to use all your summer zucchinis and enjoy a nourishing sweet piece of bread.

Bonus, this is also an egg-free zucchini bread recipe perfect for anyone with egg allergies.

This vegan zucchini bread is one of our family’s favorite recipes.

It’s not only the best way to use leftover zucchinis from your summer garden but also a cozy, sweet bread full of cinnamon, brown sugar, and vanilla flavors.

It’s also a guilt-free sweet bread as it sneaks an extra serving of greens into your day.

But beyond that, zucchinis add the most delicious moist texture to this bread and makes it want to come for more.

But luckily, it’s easy to make a vegan version of zucchini bread at home with only a few ingredients.

How To Make Vegan Zucchini Bread

To make a moist, decadent zucchini bread vegan, you only need a few ingredients, including many spices, to give the bread all its particular flavors.

The secret to making the best vegan zucchini bread recipe is to:

These are the three important things to make the best zucchini bread vegan recipe.

First, cut the extremities of zucchinis, peel half of their skins, or don’t peel at all!

As long as you clean and dry the zucchinis skins, they can be used entirely in the recipe.

Next, grate zucchini in a food processor or with a hand grater using the smaller grater blade.

Discard the zucchini water or keep it for another recipe in the fridge.

Finally, measure the amount of drained zucchini in a measuring cup. To do so, pack the drained zucchinis in the cup and measure exactly 1 cup. Set aside in a large bowl.

Finally, stir in the flour until it’s just combined – don’t overmix the batter or the zucchini bread comes out gummy or heavy.

Slightly oil the paper with coconut oil or olive oil.

Then, pour the batter evenly into the pan and bake your zucchini bread in preheated oven at 350°F (180°C).

Cool the bread for 10 minutes in the pan, lift out the vegan zucchini bread from the pan and transfer it to a cooling rack.

Cool the bread down at room temperature for 3 hours or overnight before slicing to enjoy its best texture and flavor.

This Vegan Zucchini Bread can be stored for up to 3 days in the pantry in a cake box.

However, if it’s hot where you live, it’s better to store your vegan zucchini bread in an airtight box in the fridge.

To keep the bread moist and fresh, slice just before serving.

Of course, you can also freeze vegan zucchini bread entirely or sliced it in a freezable container.

Make sure you thaw the bread slices at room temperature overnight.

Zucchini bread is delicious on its own and doesn’t need any toppings. However, you can serve this as a vegan breakfast bread topped with:

You can really play with the flavors and add many add-ons to this zucchini bread. For example, if you don’t like nuts, you can add 1/2 cup of:

Also, feel free to swap spices. A touch of cardamom or turmeric is also a great addition to the bread.

You can make this recipe with sugar-free sweeteners like erythritol and brown erythritol.

These are two keto-friendly sweeteners that don’t add carbs or sugar to the zucchini bread.

It’s a great option for people with diabetes or anyone looking for low-sugar vegan zucchini bread.

Zucchini bread is a sweet bread, so it does contain sugar that you shouldn’t overeat in your day.

Also, it’s made with healthy oil, and the added zucchinis add fiber and greens to your day.

The best time to enjoy zucchini bread is in the morning as it adds the carbohydrate and fiber you need to start the day with energy.

I love to create vegan zucchini recipes for dessert or lunch. Below I listed my top vegan recipes using zucchinis for you to try. 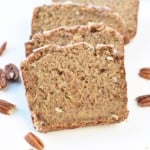 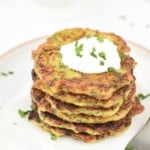 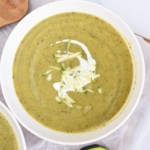 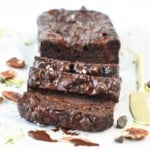 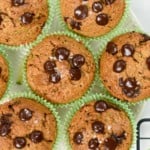 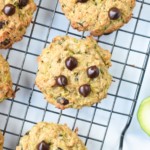 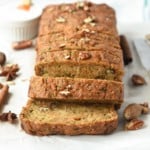 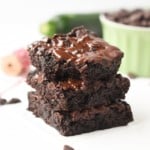 Have you made this vegan zucchini bread recipe? Share a comment or review below to connect with me! 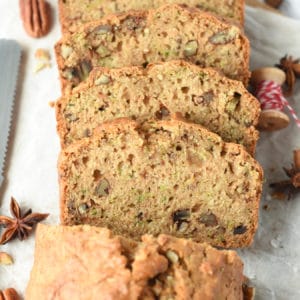