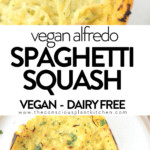 Bonus, this easy vegan recipe is also gluten-free and low-carb, with only 12 grams of net carbs per serving.

If you like Alfredo Pasta, this baked spaghetti squash stuffed with dairy-free Alfredo Sauce will make you happy!

This recipe is also gluten-free and a great recipe to eat more plants and swap regular pasta for more vegetables and fibers.

How To Make Vegan Spaghetti Squash

First, you need to cook the spaghetti squash. There are many ways you can cook a squash.

Some people love to cook squash in a crockpot, microwave, or boil it. Here we bake the squash in the oven to add a lovely roasted flavor.

First, cut the sides of the vegetable. Next, halve the squash lengthwise to end up with two ‘boats’.

Scoop out the seeds from the vegetable using a spoon, discard the seeds or wash and keep them for later.

You can roast the seeds to make crunchy appetizers.

Then, cover a large baking sheet with parchment paper and place the two pieces of spaghetti squash, flesh down, onto the tray.

Bake for 30 to 45 minutes or until it’s easy to prick the skin with a knife.

The baking time varies depending on the size of your squash. If you overbake the squash, it won’t form noodles. Just a mushy soft puree.

So check how it bakes as it goes. You know it’s almost ready to take out of the oven when:

Remove the baked spaghetti squash halves from the tray and place them on a cooling rack or plate, flesh up.

Set aside for 15 minutes to let the steam come out.

Then, use oven mittens to hold the squash with one hand, and with a fork, pull apt the flesh to form vegetable noodles.

Place the noodles aside in a mixing bowl.

You can keep the squash skins to refill later and use them as a dish, as seen in the picture.

Or you can discard the squash skin and cook this recipe as a spaghetti squash casserole in a 9×13-inch baking dish.

To make the sauce, you need:

First, melt the vegan butter in a medium saucepan over medium heat.

Then, add garlic and cook for 30 seconds until flavorsome.

Remove from heat and, using a wooden spoon, stir in flour of choice until it forms a creamy yellowish paste.

Return the saucepan over medium heat, whisk in unsweetened almond milk and coconut cream and keep cooking/whisking until it thickens and a light simmer forms.

When the sauce thickened, whisk in nutritional yeast, chopped parsley, salt, and pepper.

Keep cooking for 1 to 2 minutes until the yeast is well distributed.

If the sauce is too thick for your liking, add 1/4 cup extra unsweetened almond milk, up to 1/2 cup for a more liquid sauce.

Now, pour the vegan alfredo sauce onto the vegetable noodle. Stir the noodles to evenly distribute the sauce over the spaghetti.

Finally, place the alfredo squash noodles into a large baking dish or into the squash skins.

Sprinkle grated vegan cheese on top of the dish if desired and return to the oven for 15 minutes until it’s piping hot.

Serve immediately with extra chopped parsley on top or a drizzle of garlic-infused olive oil.

This gluten-free, vegan squash casserole stores for up to 4 days in an airtight container in the fridge. Or you can freeze the container for up to 3 months.

Rewarm in a saucepan or in the microwave until piping hot.

Can I Use Another Pasta Sauce?

Sure, you can bake a spaghetti squash and accommodate it with any regular vegan pasta sauce like marinara sauce, lentils bolognese, or just vegan butter and salt for a simple low-carb side dish.

Why Is My Spaghetti Squash Mushy?

This happens if you overcook the spaghetti squash.

In fact, to make vegetable noodles from spaghetti squash, the flesh must be cooked but still firm. You know the vegetable strands are cooked when:

Spaghetti squash is a very low-carb vegetable, and it makes a delicious low-carb pasta replacement in vegan pasta recipes.

It’s not only decreasing carbs of the recipe but also your calories with only 33 kcal per 100 grams.

Plus, it’s adding fiber and micronutrients to your meal, including vitamin C and B6.

I love vegan pasta dishes as a quick and healthy plant-based dinner. Below I listed more vegan pasta recipes easy to make in 20 minutes or so. 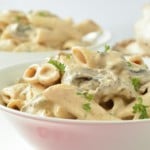 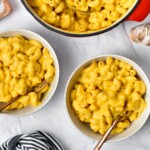 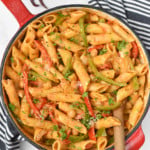 Have you made this vegan baked spaghetti squash recipe with Alfredo sauce? Leave a comment or review below to connect with me! 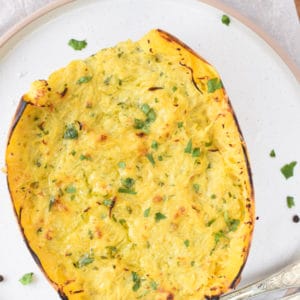