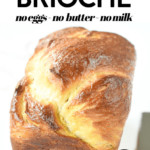 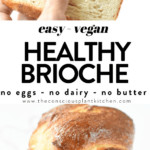 It is a fluffy, soft, and lightly sweet bread perfect for vegan breakfast toast.

As a French couple, we had to share a vegan brioche recipe on the blog.

We were born and raised snacking on brioche as kids, so now this is the version we share with our kids on the weekend.

No, a classic brioche is not vegan. It is made with butter, eggs, and dairy milk.

If you want to get that taste and texture, follow our recipe below!

How To Make Vegan Brioche

The good news is that it’s pretty easy to make your own vegan brioche bread at home with only simple plant-based ingredients.

Below I am guiding you step by step on how to make this classic French brioche vegan!

Before starting any vegan baking recipes, I recommend measuring all your ingredients in individual bowls for precision.

Remember that this recipe is tested using all-purpose flour, and it doesn’t work with flour substitutes like gluten-free flour blends, almond flour, or coconut flour.

The ingredients you need to make this fluffy vegan brioche bread are:

The first step to making brioche is to feed the dried active yeast with sugar into a lukewarm mixture of soy milk, vanilla, and melted vegan butter.

To warm the milk, you can either use a microwave or a non-stick saucepan.

Keep in mind that you want lukewarm milk. Think bath temperature 98°F (37°C), not boiling milk. This would ‘kill’ the yeast.

Combine the ingredients above into the bowl of a stand mixer, whisk with a fork, and set aside 10 minutes.

Next, sift flour and salt into the bowl and place the dough hook on the stand mixer. Then, knead the dough for 6 minutes or until the dough is soft and tacky but doesn’t stick to the bowl’s bottom.

If it sticks to the bottom of the bowl, it means you need more flour.

Add 12 tablespoons of extra flour one at a time until the dough is soft and doesn’t stick to the bowl.

Finally, transfer the dough into a large mixing bowl oiled with olive oil or coconut oil. The oil prevents the dough from sticking to the bowl.

Then, cover the bowl with a piece of parchment paper and top with a clean kitchen towel.

You know the dough is ready when it has doubled in size.

When the dough has doubled in size, push down with floured hands and transfer onto a floured surface.

If the dough sticks, sprinkle extra flour onto it.

Divide the dough into 3 equal portions and form balls.

Then, roll each ball into 9 inches long cylinder/tubes. Bring the three tubes of dough together by their extremity and pinch to seal.

Start braiding tightly but don’t pull on the dough tubes, or you would overextend them.

Pinch the extremity of the dough when you reach the end. You will end up with a long braid, longer than your 9-inch loaf pan.

To fit the pan, tuck under the extra dough from the extremities under the loaf to fit the loaf pan.

Place the braided dough into a loaf pan covered with parchment paper. Then, cover the top of the pan with a clean kitchen towel and raise for 20 minutes or 30 minutes.

In a small mixing bowl, mix melted vegan butter and a pinch of turmeric to mimic egg color.

The vegan brioche is cooked through when the top is golden brown, and a skewer inserted in the center of the bread comes out clean.

Flip over the brioche on a wire rack and cool at room temperature for at least 2 hours before slicing or overnight.

You can also use this vegan brioche recipe to make French toast.

However, I recommend slicing the brioche and letting the slices harden for a few days at room temperature before using it for vegan French toast.

In fact, this brioche is very fluffy and soft, and the French toasts taste better if the bread has had time to firm up.

This is an egg-free brioche recipe, so it stores very well at room temperature as soon as it’s stored in a sealed container.

You can keep it fresh for up to 4 days in a cake box or freeze slices in zip-lock bags for later.

Thaw the vegan brioche slices the day before at room temperature.

Can I Make Vegan Brioche Buns With This Recipe?

Yes, you can use this recipe to make buns or vegan brioche hamburger buns.

However, I would recommend decreasing the sugar to 2 tablespoons for a savory bun.

Then, divide the entire dough into 8 or 10 balls. Then, place each ball onto a baking tray covered with oiled parchment paper.

As for the brioche bread, always rise a second time for 30-45 minutes and bake until golden brown.

I love to bake for breakfast, especially during the weekend. Below I’ve shared our top 3 favorite vegan baking recipes for the family on the weekend: 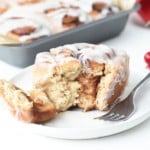 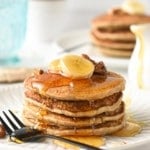 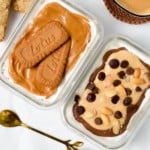 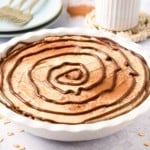 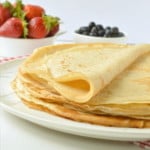 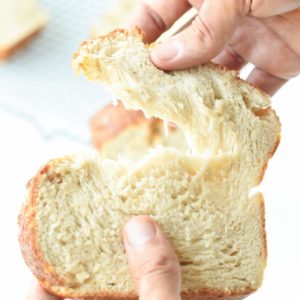 To brush on top – vegan 'egg'wash

Flour: you can’t use other flours for this vegan brioche recipe. Don’t replace it with almond flour or coconut flour or an all-purpose gluten-free flour blend. These options wouldn’t work! Plant-based milk options: you can use almond milk or oat milk for this recipe, but the brioche will be slightly drier. Vegan butter – can be replaced by light olive oil or canola oil, but the brioche will be less fluffy.
Share on Facebook Pin Recipe