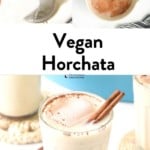 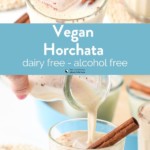 This refreshing Vegan Horchata recipe is a creamy, slightly sweet rice almond milk drink with a hint of cinnamon and vanilla.

It’s a lovely white alcohol-free cocktail for Christmas or to refresh in summer.

As you know, we celebrate Christmas on the other side of the globe.

Christmas in summer means we are all into refreshing cocktails, and this dairy-free Horchata recipe is perfect for this occasion.

Plus, even the kids can have some, so it’s a great family cocktail for the holiday season.

Horchata, also known as Orxata, is a drink made of nuts or rice.

Most authentic Horchata recipes are made of homemade rice milk, combined with regular cow milk or evaporated milk, sugar, and spices.

It’s a sweet beverage that originated in North Africa in the 11th Century and spread through the Spanish Empire to South America, where it’s now very popular.

The drink is flavored with a hint of cinnamon and vanilla.

Not always, most Horchata recipes are made from rice milk and regular cow milk to add a creamy texture to the drink, so they are not vegan.

How To Make Vegan Horchata

A Vegan Horchata is a dairy-free non-alcoholic drink with a lovely white color, creamy texture, and delicious vanilla cinnamon flavor.

It’s not only a great drink for summer but also a lovely refreshing alcohol-free Christmas cocktail.

You are probably wondering what horchata is made of. Well, it’s pretty simple. This Vegan Horchata recipe is made of a simple few ingredients:

It takes some time and patience to make a delicious creamy Horchata cocktail. The day before, place the long-grain white rice in a blender with water.

Blend on the high-speed setting until the water is cloudy white and thick, and the rice is pulsed into fine ground.

If your blender is not powerful enough for this process, pre-soak the rice in lukewarm water for an hour to soften.

Store the mixture in an airtight container in the fridge and soak overnight.

Discard the rice strain and keep the rice milk.

Stir the rice water with the remaining ingredients.  I personally like to blend the ingredients again to pulse the sugar nicely into the milk and avoid the sugar gravitating to the bottom of the drink.

Store the drink in the fridge in a jug over ice to keep it fresh before serving.

Start with a minimal amount of sugar and adjust to taste.

Serve over ice in a tall glass with a cinnamon stick in the glass to enhance the cinnamon flavor.

Enjoy your horchata with your Vegan Cornbread or Vegan Birria Tacos.

Can I Make A Fast Horchata Without a Blender?

Yes, you can! By using ready-made rice milk from the store and 3 cups of rice milk, you can make a quick and easy horchata recipe.

Can I Add Alcohol To An Horchata?

Absolutely, make this recipe boozy by adding 1/4 cup of white or blue tequila for delicious cocktails.

Horchata is a sweet milk drink with a good amount of added sugar from lactose and sugar.
However, this plant-based horchata recipe is much healthier than the classic horchata recipe because it contains less saturated fat by using plant-based milk and less sugar added using unrefined sugar as a sweetener.

How To Make Vegan Horchata Creamier?

You can make it super-creamy by using fresh plant-based milk like fresh almond milk instead of UHT almond milk which is often watery.
You can also use coconut milk, oat milk, or soy milk. They contain more fat and make drinks thicker and creamier.

What Dinner Can I Pair It With?

Like any other milky drink, the Vegan Horchata is perfect to soften the effect of a spicy dish.
So you can use it as the drink for Vegan Birria Tacos, it’s a divine combination!

Below I listed some more vegan cocktail recipes and vegan smoothie recipes to refresh and share any time of the year. 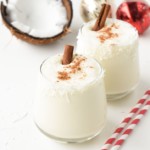 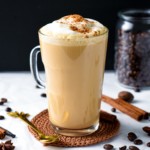 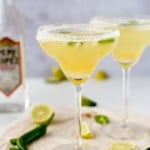 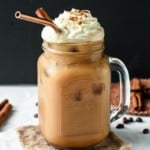 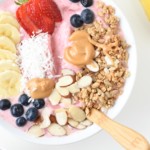 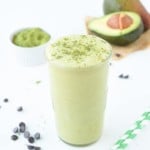 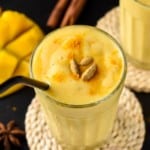 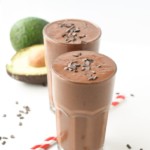 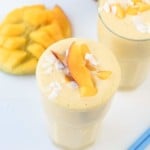 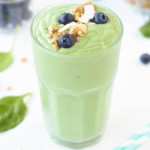 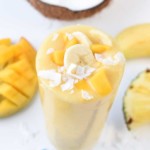 Have you made this Mexican Horchata recipe? Share a comment or review below, and let me know how much you love it. 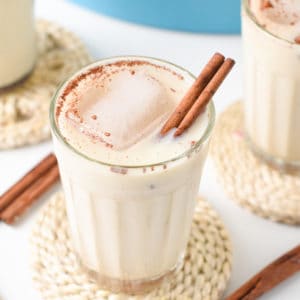