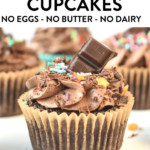 These Vegan Chocolate Cupcakes have a rich, moist, and fudgy chocolate texture perfect for celebrating a kid’s birthday or any occasion.

Plus, these vegan cupcakes are also refined sugar-free, and gluten-free options are provided so everyone can enjoy one!

How To Make Vegan Chocolate Cupcakes

It’s easier to make your own vegan chocolate cupcake at home.

It’s also a healthy way to bake one of the most popular desserts or celebration cakes.

In fact, these dairy-free cupcakes are also refined sugar-free and contain half fat than regular recipes.

Let me share how I make the most delicious vegan chocolate cupcakes with a few simple pantry staples.

As mentioned above, all you need to make vegan cupcakes are very simple, inexpensive ingredients.

Make your own vegan buttermilk

All you have to do is whisk apple cider vinegar or lemon juice with your plant-based milk. Set aside the mixture for about 5 minutes until it curdles and resembles buttermilk.

Now that the vegan ‘buttermilk’ is ready, stir in applesauce, canola oil, and vanilla extract.

Instead, work by batch, add 1/3 of the mix, stir in and when the dry ingredients are almost entirely combined to the wet, add more.

Repeat until all the dry ingredients are incorporated into the liquid ingredients and the batter is fairly liquid.

It makes it easier to release the cupcakes later. I mean that the paper won’t stick to the crumb.

Bake until a toothpick inserted in the center of one of the vegan chocolate cupcakes comes out clean.

Cool down on a cooling rack for at least 2 hours if you want to frost them with my vegan chocolate buttercream frosting recipe.

For the frosting, you have three options. You can make one of my three vegan frosting recipes below depending on the flavor you love:

Whatever you choose, make sure you cool the cupcakes completely before pipping any frosting on top. If the cupcakes are at room temperature, the frosting holds its shape perfectly and won’t melt.

These vegan cupcakes are topped with my vegan chocolate buttercream recipe. I used a piping bag to pipe about 3 tablespoons of frosting on each cupcake.

Then, I placed two squares of 85% Green & Black dark chocolate.

Finally, I added some grated dark chocolate and a few vegan-friendly sprinkles for the color. You can also add some vegan candies or vegan marshmallows if you serve these chocolate cupcakes to a vegan kid’s birthday party.

For a healthy cupcake topping option, choose some of the below:

These vegan chocolate cupcakes store well in the fridge in an airtight container for about 3-4 days.

You can also freeze vegan cupcakes, like regular cupcakes, keep them in an airtight box and thaw at room temperature the day before.

One of the most common questions I get for vegan cupcake recipes is whether a flour can be swapped for another. Unfortunately, you can’t swap all-purpose flour with low-starch flour like almond flour, oat flour, or coconut flour.

The only flour swap that works as a 1:1 replacement with these vegan chocolate cupcakes are:

The next question is often about sweeteners. Here you can replace the sugar with any other crystal sweetener like:

Remember that you can’t replace a crystal sweetener with a liquid sweeter, or the cupcakes end up gummy. Don’t use maple syrup, agave syrup, or any liquid sweetener to replace sugar.

I tested this recipe with many oils, and the best results for alight and fluffy vegan cupcakes are:

As a result, these three are not my first recommendation, but if it’s what you have at home, it will work.

I love to bake vegan cupcakes for any occasion, birthday, holiday season, or enjoy a treat!

Below I listed more vegan dessert recipes you may want to try. 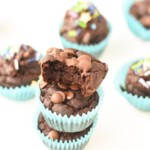 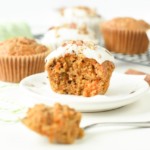 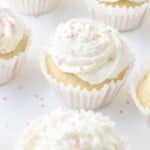 Have you made these vegan chocolate cupcakes?

Share a review or comment below to connect with me and tell me how much you enjoy the recipe! I love to hear back from you. 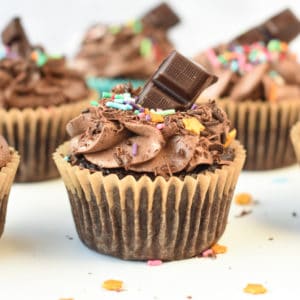