These vegan cinnamon rolls are soft, chewy cinnamon buns made of simple homemade yeast dough and filled with cinnamon sugar, and topped with a sticky sugar glaze. They will bring the most delicious sweet smell in your kitchen for a cozy vegan breakfast. 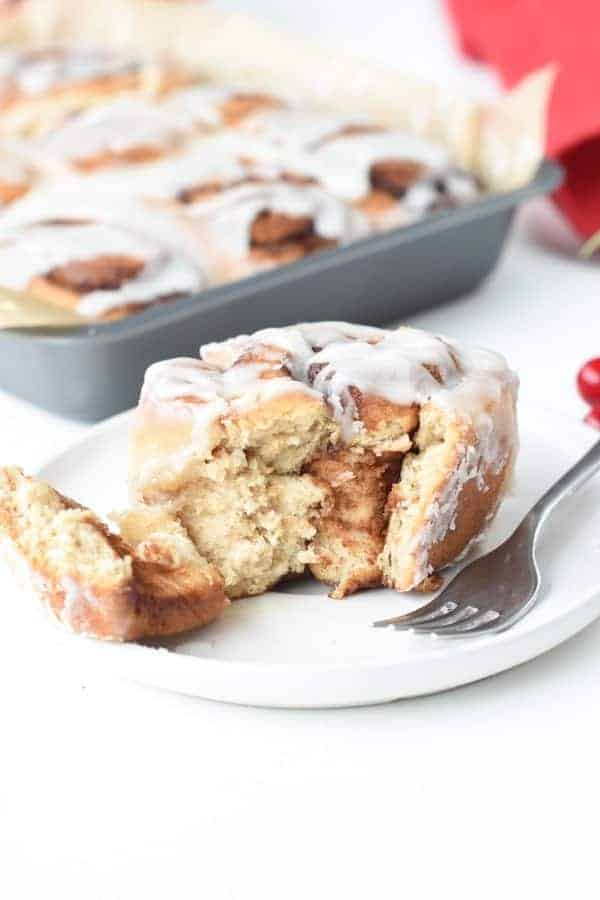 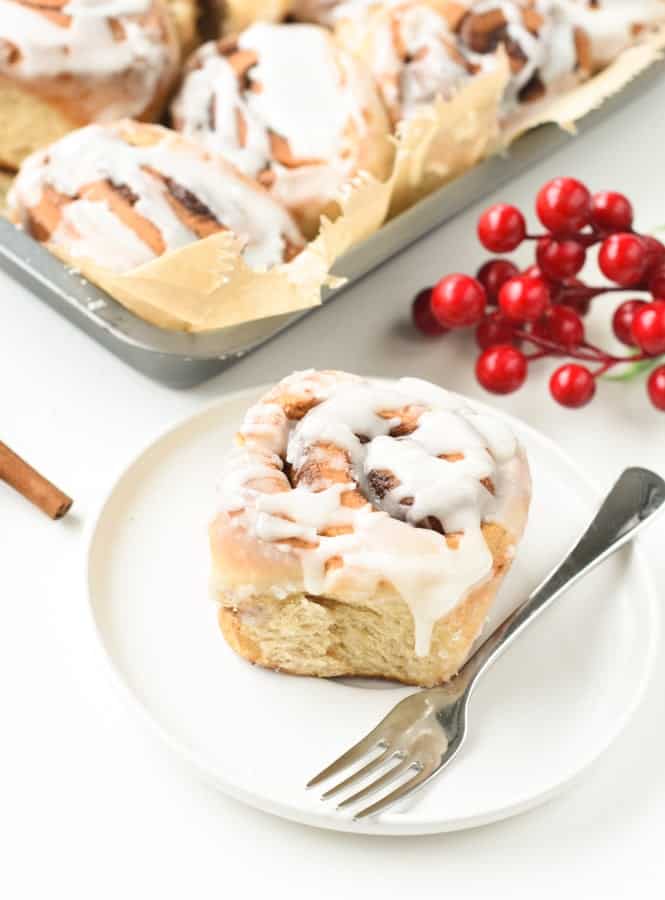 How to make vegan cinnamon rolls?

Trust me, it’s so rewarding to make your own breakfast cinnamon buns, and I guarantee the whole family will love this recipe.

For a different perspective on this recipe, watch my web story: making the best cinnamon rolls!

The first step is to measure all your ingredients into small bowls. Then, sort them out in three different areas, so you don’t get confused.

Group your ingredients for:

Making the dough for the homemade rolls

First, make the cinnamon roll dough. This requires a few ingredients, including:

To make the dough, start by warming the soy milk in a saucepan over medium heat or in the microwave until it reaches 37C/98F – think bath temperature.

Then, stir in melted butter, sugar, and yeast. Transfer to the bowl of a stand mixer and sift the 3 cups of flour and salt.

Finally, knead with the dough hook attachment for 6 minutes until soft and elastic. It shouldn’t be sticky on the sides of the bowl. If it is, add more flour, 1-2 tablespoons at a time.

When the dough is soft and elastic, lightly oil your hands to transfer the dough into a large bowl oiled with coconut oil.

Note that oiling the bowl is important, or the dough is going to stick to the bowl.

Then, cover the bowl with parchment paper and top it up with a clean, warm towel.

The dough will double in size, so the piece of paper prevents the dough from sticking to the towel.

Believe me, you don’t want this to happen. It’s a nightmare to clean up!

Meanwhile, whisk together the brown sugar and cinnamon in a small bowl. Set aside for later. Also, keep the vegan butter used in the filling at room temperature, so it’s soft when needed.

Now that the dough has doubled in size place the dough on a floured surface and start rolling into a large 12.5-inch x 10.5-inch rectangle shape to make 10 cinnamon rolls.

Now, rub the soft vegan butter all over the rectangle except the edges – leave 1/4 inch uncovered.

Finally, start rolling the dough tightly from its longest side (12.5-inch side) until it forms a cylinder.

When you reach the top, brush some water on the unbuttered edge. This helps to seal the roll tightly.

Cut into rolls and rise again

Now, cut the cylinder into 10 cinnamon rolls of about 1 inch each and place them into a greased 9-inch square baking dish. I recommend covering the dish with parchment paper for this vegan cinnamon rolls recipe.

This prevents the rolls from sticking to the pan.

Cover the baking dish with the piece of parchment paper used before and a clean, warm towel. Rise the rolls a second time for 30 minutes. This second rise is optional, but it makes the rolls very soft and fluffy.

Bake the cinnamon rolls in a preheated oven at 180C/350F for 20-30 minutes. Note that the longer you bake them, the drier and less soft they will be. I actually recommend underbaking cinnamon rolls to increase their soft, pillowy texture. 20 minutes of baking time is ideal. 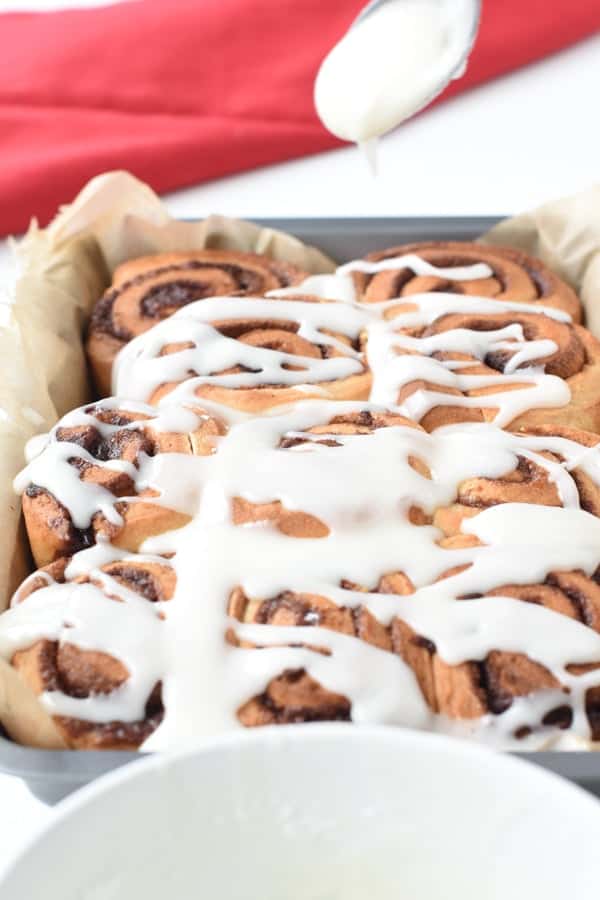 Cool down for 30 minutes on a cooling rack before adding the icing.

To glaze your cinnamon rolls, combine powdered sugar with melted vegan butter and maple extract. Drizzle generously all over the buns.

How to store cinnamon rolls?

You can store the rolls at room temperature for 3 days if your house is at 19C. Otherwise, place them in the fridge in a sealed cake box. They will be delicious for up to 5 days.

Can I freeze cinnamon rolls?

Yes, you can freeze these rolls in a sealed container. Make sure they don’t touch each other, so it is easier to thaw them individually. Thaw the rolls one day before on a plate at room temperature. 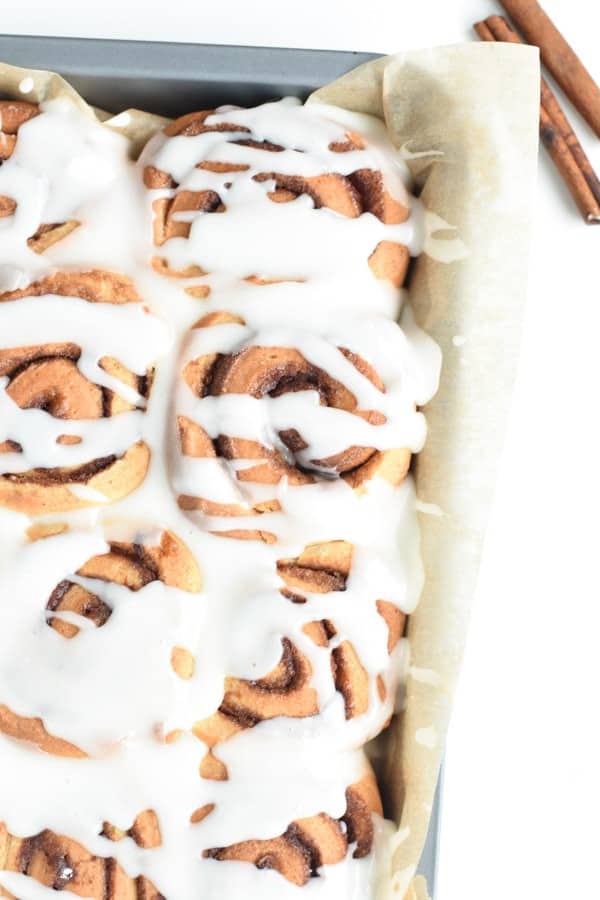 Can I add raisins or chocolate chips?

Yes, you can sprinkle up to 1/2 cup of dried sultana raisins or dark vegan chocolate chips all over the dough rectangle, on top of the cinnamon sugar. Make sure you gently press them into the dough, or they will run away from the roll when rolling. 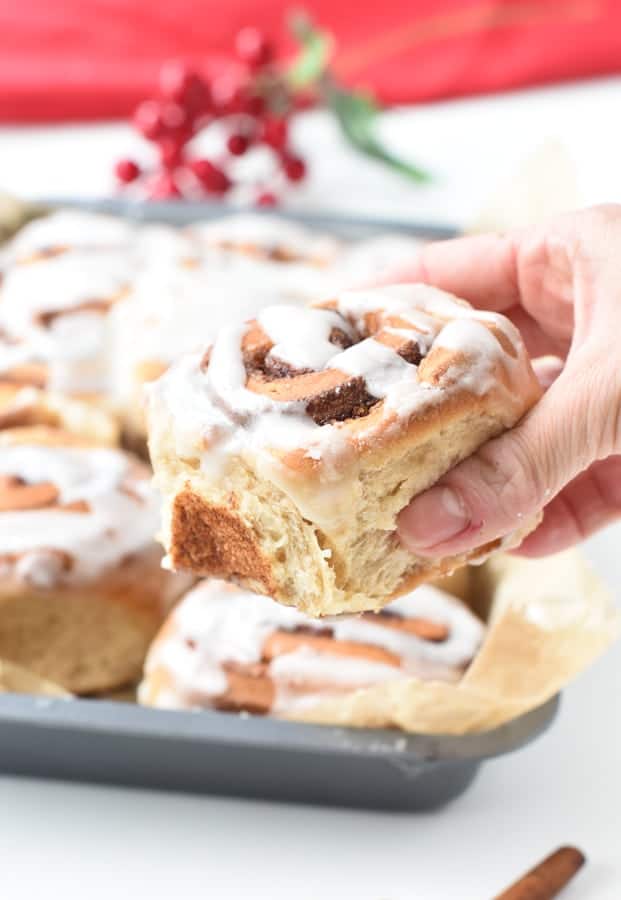 You can use this recipe to make healthier cinnamon rolls. Follow the swaps below:

I love freshly baked goods as a vegan breakfast. It brings the best smell in the house, and it’s so rewarding to bake bread. Below I listed my favorite vegan bread recipes for breakfast: 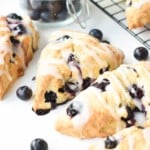 Vegan blueberry scones
4.88 from 145 votes
These easy Vegan Blueberry Scones are crispy, buttery scones with a moist soft crumb filled with juicy blueberries and flaky edges
Check out this recipe 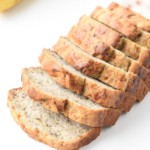 Easy 5-ingredient Banana Bread
4.93 from 27 votes
An easy, healthy banana bread made with only 5 ingredients, vegan, dairy-free and egg-free.
Check out this recipe 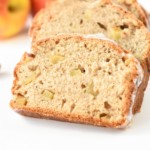 Made these homemade vegan cinnamon rolls and love it? Share a comment or feedback below. I love to connect with all of you. 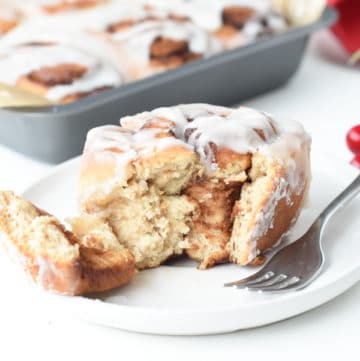